Vice President Dr. Mahamudu Bawumia has said that his attention has been drawn to a video by Anas Aremeyaw Anas (as posted on his social media handle) showing the Minister of State for Finance, Mr. Charles Adu Boahen, apparently using his name,  to peddle influence and collect money from supposed investors.

Dr. Bawuamia said if what the minister is alleged to have said is accurately captured in the video, then his position as a minister of state is untenable.

He should be dismissed summarily and investigated.

“I am unaware of any such meeting held by Minister Adu Boahen or a supposed ‘appearance fee’.

“My most cherished asset in life is my integrity and I will not allow anyone to use my name to engage in corrupt activities,” he said in a Facebook post on Monday, November 14.

Meanwhile, the management of the Accra International Conference Centre (AICC) has said that the showing of the ‘Galamsey Economy’ documentary by Tiger Eye PI, headed by ace investigative journalist Anas Aremeyaw Anas, will come off at the centre as scheduled.

The management said the matter which resulted in the rescheduling of the venue, has been resolved.

“Our attention has been drawn to reports that an advertised event due to take place at the Accra International Conference Centre (AICC) by Tiger Eye PI was being moved from our venue.

“The initial confusion was due to a scheduling conflict at the level of the AICC staff and not in any way a pollical decision as is being speculated.

“The matter has been resolved. We have contacted the organizers and the event is expected to come off as scheduled.” 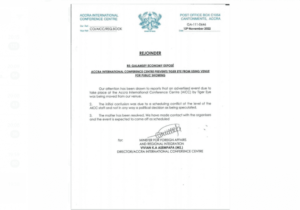 Tiger Eye PI earlier said in a series of tweets on Sunday, November 13 that it “is saddened that barely 48 hours to the public screenings, when invitations have been sent to the diplomatic community and other high-profile individuals in society, and flyers sent out to the public, we have had to look for a new venue.

“We would like to apologise to the public for the inconvenience of the change of venue. Our agent is securing another auditorium and we will update the public soon on the new venue. “

All tickets already out are valid for the new venue.”