The former Municipal Chief Executive (MCE) for Agona West, Mrs. Justina Marigold Assan has been sworn into office as the new Central Regional Minister at a short ceremony in Accra.

The ceremony was presided over by President Nana Addo Dankwa Akufo-Addo.

Mrs. Assan assumes the mantle of the regional minister from Mr. Kwamena Duncan and becomes the second woman to occupy such a position in the region after Mrs. Ama Benyiwa-Doe of the National Democratic Congress (NDC).

Prior to being sworn in, Mrs. Assan revealed in an exclusive interview with the Daily Graphic that she would use her office to expedite the growth and development of the Central Region.

According to her, despite the many resources and economic potential, the region was endowed with, it was very worrying that the region was still referred to as the poorest after the regions in the north.

“Although it will be quite challenging especially where some of the youth may not have the requisite skills to take advantage of the many job opportunities in the formal sector, government together with partners would ensure the decentralisation of job creation to reduce poverty to the barest minimum.”

Mrs. Assan, 45, was born on November 13, 1976, at Agona Swedru in the Central Region and had her basic education at ADC “C” Basic School at Bebianiha and her secondary education at Swedru Secondary School (SWESCO). 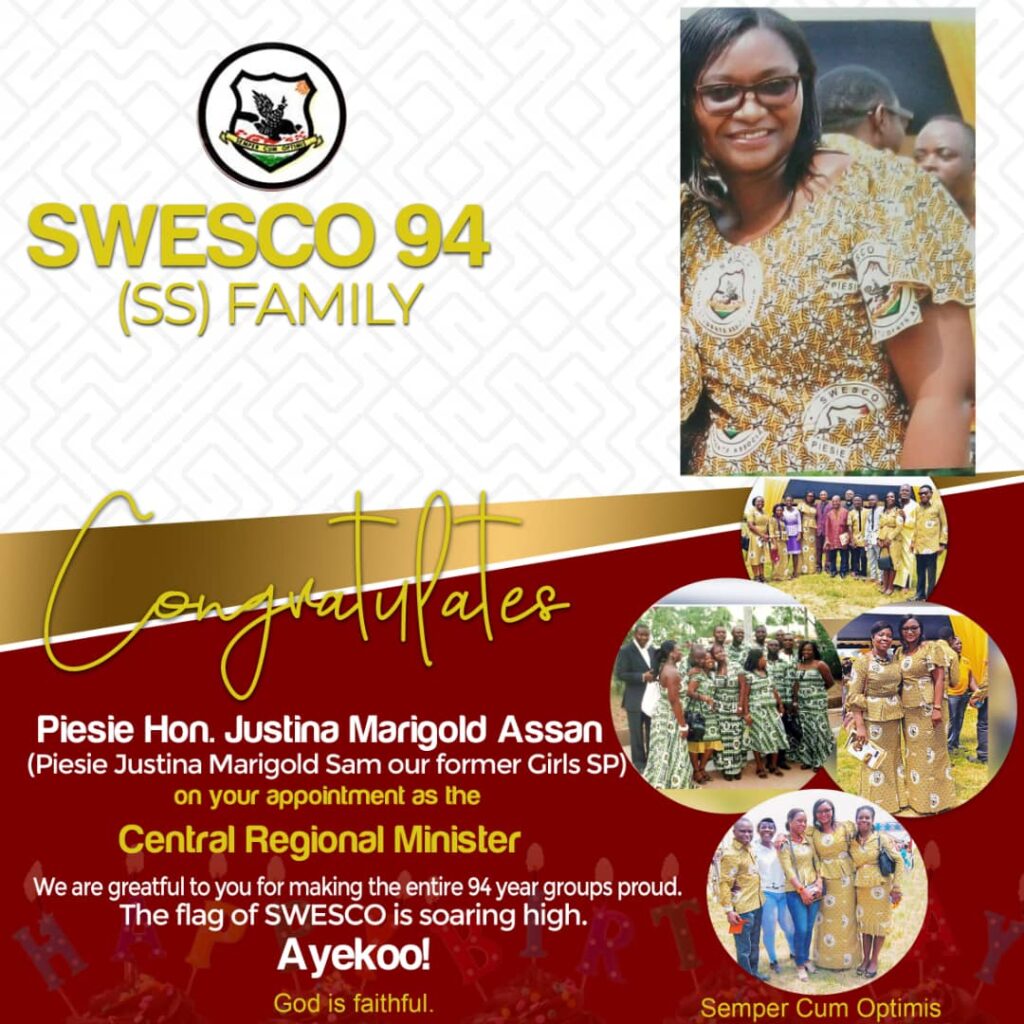 She was blessed with leadership skills at a very tender age in her life. At both primary six and JHS 3, she was elected the school prefect and was very much loved and respected by her peers and teachers. After completing Junior High School (JHS), she had her secondary education at SWESCO from 1991 to 1994. Once again, she was elected the Girls’ School Prefect, a duty she performed with admiration.

After completing OLA Training College, she started her teaching career at Bawjiase Methodist JHS in September 1999 as Vocational Skills and Religious and Moral Education teacher as well as a counselor.

While teaching, she pursued further studies and graduated from the University of Education, Winneba (UEW) in 2006 with B. Ed [Home Economics].

Prior to her appointment as the first woman Municipal Chief Executive (MCE) for Agona West, she was a teacher and Head of Department of Home Economics at Obrachire Senior High School (SHS), an Assistant Examiner with West African Examinations Council (WAEC), and Home Economics tutor at the College of Distance Learning, UCC.

She is currently pursuing a master of philosophy degree (MPhil) in Home Economics at the University of Education, Winneba (UEW).

On the political front, she has been a keen supporter of the New Patriotic Party (NPP) since 1992 following the family’s political tradition.

She started from the grassroots and occupied positions such as the polling station women organiser for Bebianiha, a suburb of Agona Swedru.

Also, she has occupied the position of Deputy Organiser of the Agona West Constituency as well as the Deputy Women’s Organiser for the Central Region.

She is married to Joseph Chris Assan and they are blessed with three children.