Ghana’s male under-23 team, Black Meteors, cruised past their Mozambican counterparts with a 2-0 victory at the Baba Yara Stadium in Kumasi on Sunday in the qualifier for the U-23 Africa Cup of Nations in Morocco next year.

Ghana scored two goals, one in each half, to bring the aggregate scoreline to 4-1 after winning the first-leg clash 2-1 in Maputo last week.

Sylvester Simba opened the scoring during the added-on time in the first half, firing home from the edge of Mozambique’s penalty box after latching onto a through pass from teammate Augustine Randolph, with goalkeeper Texeira Francisco failing to stop the ground shot.

Seven minutes earlier, Mozambican goalie Francisco denied Simba a scoring opportunity when he parried a close-range shot to the corner.

Ghana maintained the momentum after recess and increased the tally in the 54th minute through a spot kick expertly taken by Daniel Afriyie Barnieh after Simba was fouled by Keyns Abdala. It took Barnieh’s tally in the tie to three goals after scoring twice in the first-leg match in Maputpo last week.

The Meteors came into the game full of confidence of running riot over the Mozambicans and made their intentions known in the eighth minute when Barnieh fired straight into the waiting hands of Francisco after receiving a pass from Simba who beat his markers to set up his captain.

Numerous opportunities came the way of the forward but he failed to convert them into a goal, including a glorious chance in the 46th minute when he headed wide in front of an empty net, after Abdul Razak Yussif’s header to Simba’s cross bounced off the crossbar with the rebound falling in the path of Barnieh. 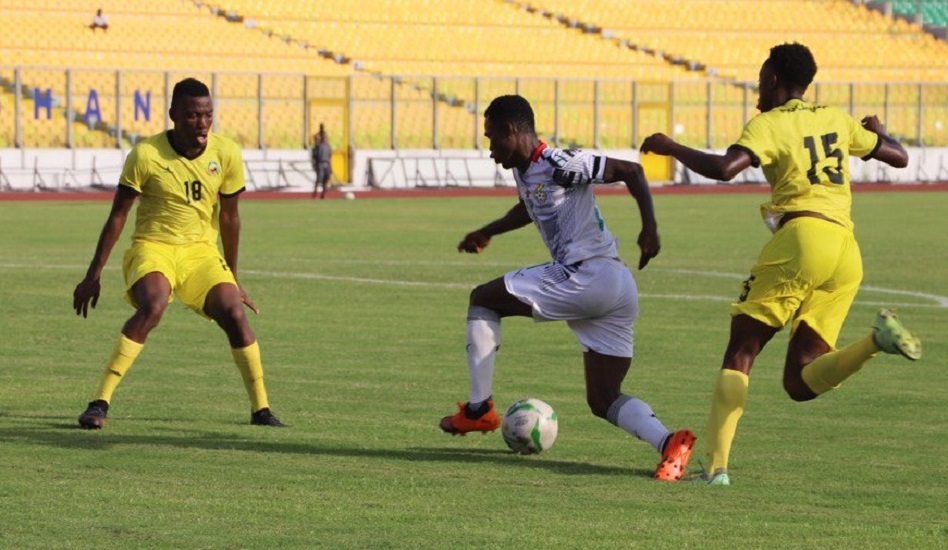 In the first half, the Mozambicans played a very defensive game and allowed the Meteors to pin them to their own half.

The game was so packed in the midfield that the Ghanaians had to rely on the flanks in an attempt to penetrate their defence.

Back from recess, the visitors opened up the game and took it to their opponents and also tried to create goal-scoring opportunities.

The closest they came was in the 73rd minute when Viola Alberto Viola brought the best out of Ibrahim Danlad who used his body to block the ball from entering the posts.

In the 88th minute, Viola picked a ball behind the Ghanaian defence to score what he thought was a clean goal. However, the goal was disallowed after Assistant Referee Adbul Aziz Bollel flagged it offside.