Novak Djokovic thanked the crowd for a “welcoming reception he could only dream of” after he made the perfect return to the Australian Open with victory over Roberto Carballes Baena.

The Serb won 6-3 6-4 6-0 in his first Grand Slam match in Melbourne since his controversial deportation last year.

Djokovic, 35, walked out to loud cheers, with flags and banners displayed around Rod Laver Arena.

“I couldn’t ask for a better start to the tournament,” he said.

“Thank you for giving me such a welcoming reception that I could only dream of,” he told the packed crowd.

“I feel really happy that I’m back here in Australia and on the court where I have had the biggest success in my career.

“Definitely this court is the most special court in my life.”

Djokovic was unable to compete at last year’s event after the Australian government cancelled his visa because of his Covid-19 vaccination status.

He had already received plenty of support from fans on his return to Australia earlier in January.

He also praised the reaction he received from a sold-out Rod Laver Arena in an exhibition match with Nick Kyrgios earlier this week.

The Wimbledon champion is looking to make up for lost time as he pursues Rafael Nadal’s record of 22 Grand Slam titles, having also missed last year’s US Open because of the United States’ travel restrictions.

Djokovic has been managing a hamstring injury and took to the court with heavy strapping on his upper left leg.

But he did not appear limited by the problem and, sparking into action to save three break points in the fifth game of the match, went on to demonstrate his class on his favourite court in a near-perfect third set which saw him lose just four points in the final six games.

It extended his remarkable winning streak at the Australian Open to 35 matches – a run stretching back to 2018 – and the manner of the victory suggests he will be difficult to stop once again.

He will play Bolivian Hugo Dellien or French qualifier Enzo Couacaud next in the second round. 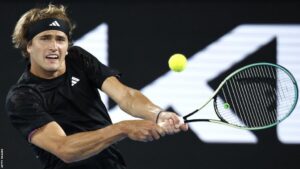 “Whatever happens now, this tournament is a success for me,” Zverev said.

Zverev, 25, missed Wimbledon and the US Open after sustaining the injury in his match against Rafael Nadal at Roland Garros, only returning to the court for an exhibition in December.

He was on court for four hours against Varillas and will face American lucky loser Michael Mmoh or French qualifier Laurent Lokoli next.

Britons Andy Murray and Dan Evans were also among the winners on Tuesday.