Jürgen Klopp has expressed his excitement for tonight’s Champions League clash with Internazionale while warning there can be no complacency if Liverpool are to progress to the quarter-finals.

The Reds hold a 2-0 lead over the Serie A team from the first leg at San Siro, where goals from Roberto Firmino and Mohamed Salah handed Klopp’s men victory.

They meet again at Anfield this evening to decide who progresses to the last eight, in a tie the manager feels has all the hallmarks of the most special of games.

But, in his matchday programme notes, Klopp also detailed how Inter’s credentials mean Liverpool have to maintain impeccable attitude and performance levels to continue in the competition.

“What a fixture, hey? Even saying it out loud makes you excited. Liverpool versus Internazionale in the European Cup,” writes the boss.

“What makes it better is we face each other in a moment where we are both proper forces in the game. This isn’t to sound arrogant about ourselves, by the way, I just think the current standings and performances of recent seasons makes this true. We are a proper team. For Inter, it is absolutely the case also. They are the real deal. They are a proper contender for this title. 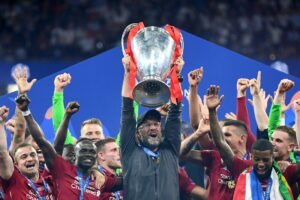 “What a job Simone [Inzaghi] is doing with this club. Current champions of Italy, near the top of Serie A again and looking very strong.

“We watched their match on Friday night in the team hotel, ahead of our own game against West Ham. I don’t see many weaknesses in them, if I’m being honest. From back to front they have top-quality players, organised superbly well. A clear plan, a clear idea.

“There is so much to like about how they play. I really enjoy watching them. Not so much having to face them, though.

“The first leg in Milan was such a tough game. I would go so far as to say it was one of the most difficult of the season for us in all competitions. They were aggressive, in the positive sense of that word, and purposeful. We played very well and defended very well, which is why we come into this contest with an advantage in the tie.

“But it is just an advantage at this stage and it means nothing if we don’t have the right attitude coming into this one. It is only half-time. That is all. And if my team were trailing 2-0 at half-time my mindset would be game on, all to play for. Add in the fact they have 90 minutes and not 45, it is obvious we have a proper fight on our hands.

“It is so important that everyone inside this stadium tonight, with Liverpool in their hearts, is ready to give all they have to ensure we progress in this competition. This is players, management and supporters. If anyone has even a tiny percentage of complacency or entitlement, please stay away.

“We face a ruthless team, with elite mindset players, used to winning, with know-how of how to do what it takes in this competition and with a manager who is exceptional at building a plan to complete a job. Anyone who watched the first leg knows this also. This tie is alive and it is there to be attacked and won. 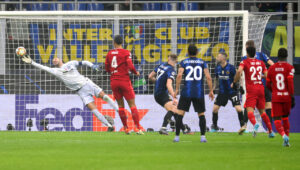 “Our mindset, as a team or club, does not worry me for one second, for what it’s worth. I only say all this because this is what this column is for: essentially to lay out the themes that matter to us going into a fixture. Values matter to me, as the leader of this team and club.”

Klopp added: “I opened these notes by saying what a special feeling this fixture creates, simply by seeing the two club names paired with each other. One of the biggest factors in that is atmosphere. When you think of Liverpool v Inter you think of a full and passionate Anfield. You think of it being electric and partisan.

“Our supporters need no team-talk for a fixture with this heritage. This special place will be a cauldron of energy tonight, I’m sure. And we will need it.

“If we all arrive knowing that to enjoy a special night we have to be our best and work our hardest, I am confident we can create more memories together.”